Can you car do that? 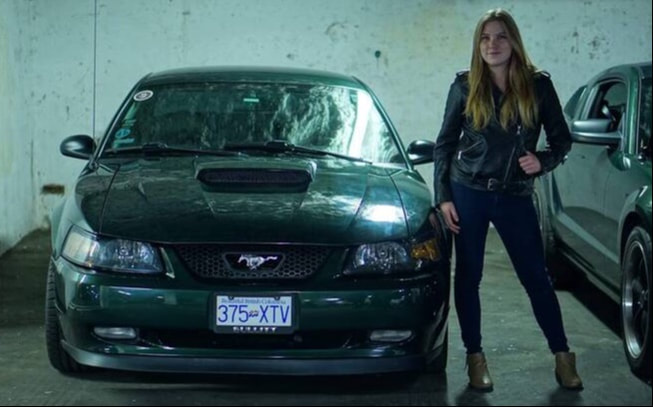 Meg McEwen, Canada (British Columbia) 2001 Dark Highland Green #1516
When I was about 13 years old around Thanksgiving time, one of the local channels was airing the movie Bullitt. My dad encouraged to come watch it, saying “Meg, you’ve to see the greatest chase of all time!” I was mesmerized…glued to the screen. I loved that very muscular, plain Jane, and raw 1968 car in Highland Green. My favorite scene was when Frank Bullitt overshot that corner, looking back over his shoulder, and smoke coming off the tires. That was my introduction to Bullitt. It was no “Fast and Furious”, which was the movie that meant speed at that age. I never got into that because it didn’t have a lot realistic factors about cars. I didn’t know much about when Bullitt was filmed or who Steve McQueen was, but I knew Bullitt was the real deal. That was what driving a car about, and that was a baseline for me.

I was 14 when the 2008 Bullitt was released. I was memorized by that “no bones” Highland Green car too. It had such a sleekness to it…so understated. I decided there that I have to have that car someday; no doubts about it. I was also aware of the 2001 Bullitt because of Chris Wlodyka, who was in a local car club with my father (he owns an ’04 Cobra). I thought that it was a sharp car. That silver fuel door stands out even though it was an overall understated car. I also knew Heidi, another person in the club who had an ’01. Even though it was a copy of the same car, I associated it with her, just like Chris, thought it was an extension of them both and so uniquely them. Fast forward to when I was nineteen, and I got a loan for a car. An ’03 Cobra what I wanted but it was out of my price range. Chris Wlodyka said to me “just get an ’01 Bullitt. You don’t have to touch anything on it. It has a suspension upgrade. It has a brake upgrade. In fact, I know where I could find you one.” And the rest is history.

It is a perfect car that I can use as a daily driver, I can race it, and I can show it. I originally bought it to tie me over until I got another upgraded Mustang, but the longer I’ve owned the car, the more I love it. I have a mechanical background, so I do maintenance and little things to extend the longevity of the car. When I travel, I have tools and spare parts like the spare T-hose fitting for the coolant system, coil packs, and other little things that people don’t generally think about. I just try to be prepared. I work as an auto body painter, and I know my car was hit and repaired previously, even though it was undocumented. I’d like to find out what collision shop in Ontario repaired 1516. I’ve repainted quite a few thing on it already. I feel fortunate that I have these skills, so that the car, as it ages, can be kept in shape. I want it to visually be a perfect car, and I can say, yes, I repaired this myself. I did the work. No detail was spared!
I’ve drag raced my car, track raced it, and autocrossed it, even drove up Pike’s Peak with it. The more I do those things, the more I appreciate the Bullitt. The big light bulb moment for me was when I took it down to Seattle International Raceway with the Mustangs Northwest Club. I was on track at one point with an instructor and he saw me getting frustrated because I was getting around a corner really slow, and lots of cars were passing me. He asked me what was wrong and I said “This car is really slow.” He said ‘You have it all wrong. The Bullitt models are well-balanced cars and do exceptionally well here.’ Ever since that was said to me, it changed my attitude. It’s not the best handling or highest horsepower option out there, but it holds its own. I’m really proud of that, even if thinking I don’t have the latest and greatest. I don’t trailer the car. It’s been through some pretty hard track abuse, and it has always gotten me home. Can your car do that?!
​
I’ve been going to car shows since I’ve had the Bullitt. I’ve gotten a number of awards for it – a first place in an international Mustang meet in Vancouver, three gold level and one silver level award from Mustang Club of America through Mustangs Northwest in the judged occasional driven class. I’ve gotten first, second, and third place awards in my local shows. But I think my claim to fame was at the 2018 Friends of Steve McQueen Show in California. Even though I didn’t win any awards, my car represented the ‘01s in the Bullitt car display of all the versions – 1968, 2001, 2008, and 2019. I guess I was in the right place at the right time, as I had arrived early at the show before the evening banquet. I was asked by one of the local Bullittheads to use it. I wasn’t sure about that because I had driven it a long way down from Canada. I don’t know what possessed me to do this but I had brought my polisher with me because I had to work on that front end to get it clean after driving 3000 km to get there. The next day after cleaning, I had to back the car up on the ramps on to a display turntable, and I was thinking ‘my beat-up old ’01 was going to be up there and on display during a fancy banquet after all its track time.’ I couldn’t be more thankful to Michael O’Donnell to giving me that opportunity but also believing that car was good enough to be used that way. The McQueen family was so great to me at that event. They thanked me for driving down that long way and signed the car for me. It was especially cool for me to see Madi McQueen, Steve McQueen’s granddaughter, so involved that.
​
Looking back, if you had told me that simply buying a vehicle like this would have opened all these doors for me, I wouldn’t have believed it. I am just thankful for the opportunities that I’ve had, the people who helped me out…it’s just been a great, great experience, and I can never part with my ‘01. They say cars can be replaced and people can’t, and that’s absolutely true, but I am thankful I have 1516 in my life and hope I can have more memories to come with a fantastic machine.
more stories