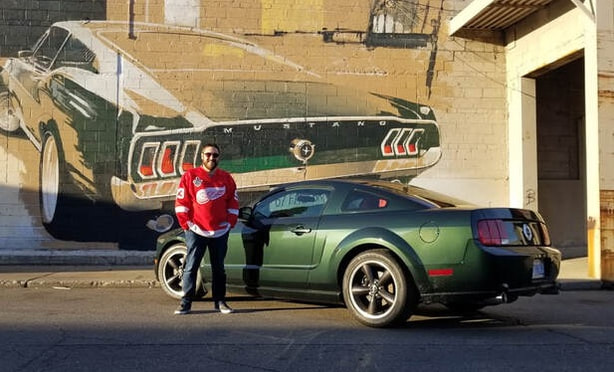 ​Mike Laney, Michigan USA 2008 Highland Green #2065
I already knew that I wanted to own a 2008 Mustang Bullitt, someday … But after having spent a weekend with Bullitt owners at the 2011 Bullitt Nationals at the Tail of the Dragon, I knew I had to have one. Not just because I loved the car, but also because of the community and camaraderie surrounding it.
When I started my search, I made the decision that I wanted a 2008 Bullitt model with no options beyond the color choice of Highland Green. The cars are pretty limited in their options, so I wanted the simplest version for lower cost of ownership, more than anything.  I found a car in Knoxville, Tennessee, that cheeked all the boxes – it was an ’08, it was green, it was stock, it had no additional options and it had 42,000 miles. I also knew I didn’t want someone’s perfect 500-mile garage-queen because I knew I was going to drive it.

Ownership of the car has been phenomenal. It’s been extremely reliable since I bought it in April, 2013. Over the years, I’ve made a few modifications to it. My mentality has always been to make the car drive better, not just to make it faster. The drivetrain is basically stock. Other than hood struts from Classic Design Concepts and a set of Ford Racing GT500KR mufflers, it’s exactly as it came from Ford. So, the majority of what I’ve done has been to improve the suspension, brakes, and tires. I’ve installed the Ford Racing adjustable handling package, Ford Racing lower control arms front and rear, and a updated the brakes to the 2011-14 Mustang GT specs. I decided to stick with 2011-14 OE front rotors rather than an aftermarket slotted or drilled brake setup in order to maintain the car’s understated design language. Finally, I installed a set of super-sticky Michelin Pilot Super Sport tires, which in my opinion are the best street tires money can buy.

I’ve kept modifications to the exterior of the car similarly subdued. The only thing I have changed on the outside are body-colored mirror caps. The looks of the ’08 are closer to the look of the ’68 car, which was really appealing to me. The cleanness of the design – being almost totally devoid of badging except for the Bullitt faux gas cap emblem – really is a good recreation of the look-and-feel of what Steve McQueen drove in the movie ... It’s really a ‘less-is-more’ kind of situation. I think that goes for the driving experience as well. Even though 315 hp and 320 lb.-ft. of torque are not massive numbers in 2020, the car is still quick and a ton of fun. I’ve driven a lot of faster cars over the years, but what I really like about my Bullitt is that you can enjoy more of the car, more of the time.

I’ve had the opportunity to do some pretty cool things with the car over the course of ownership, too. I helped to organize a showing of Bullitts at the 2013 Mustang Memories show. I went a little crazy contacting owners in any way I could in Michigan, Ontario, Ohio, Indiana and into the Chicago area, and we managed to get 40-something cars to roll into the event together. It’s always cool to see similar Mustangs to enter a show together, but because our cars were so similar in color and style, I think it really made a statement. In late 2013, my Bullitt was selected to be one of the cars in the display at the unveiling of the 2015 Mustang in Dearborn. Every generation of Mustang was present, so it was quite an honor to be  parked among Mustang royalty, including the Mustang 1 concept car and the first publicly purchased Mustang owned by Gail Wise at the event.

Then, in 2015, following the Bullitt Nationals being held in Detroit, in conjunction with the Mustang’s 50th birthday, fellow Bullitt owner, Greg Dabkowski and I decided to found Motor City Bullitts. It’s a local car club for owners of Mustang Bullitts in the Metro-Detroit area. Over the past five years, we’ve attended car shows and cruise-ins, visited museums and gone on scenic drives through some of Michigan’s best driving roads. It’s been an amazing way to enjoy our cars and make lots of friends in the process!

Another neat thing I was able to do with my Bullitt came in 2016, after Ford won at the 24 Hours of Le Mans with the Ford GT. My car wound up being part of the lighting celebration at Ford World Headquarters, quite unexpectedly. My wife and I drove down to Dearborn to see “GT WINS AT LE MANS” spelled out on the building using the lights of people’s offices, just like they did in 1966. As we were watching, a photographer there wanted to create a long-exposure photo of a car in front of the building so a long, swooping light stream would show up. The photographer asked me to do a slow lap in front of the building … And so my Bullitt’s taillights are the taillights in that photo. It’s not something that anyone would ever know unless I told them, but it was a very cool thing to be a part of.

Finally, in 2018 at Mustang Memories, my car represented the 2008 model-year version when the 2001 and 2019 were photographed in front of Ford World Headquarters with Sean Kiernan’s 1968 movie car. The taking of that photo was definitely an occasion, something that people hopefully will remember for a long time. It was a once-in-a lifetime thing.

In addition to being involved in these significant events, I’ve just really enjoyed owning and driving this car. It puts a smile on my face every time I start it up, it gets attention for all the right reasons, and I’ll never get tired of driving it. I’ve put about 50,000 miles on it in nearly 8 years of ownership and with any luck, it’s something that will remain in our family, hopefully, for generations to come.
​
On top of all that, it’s been amazing to be part of the Bullitt community over the years because of the camaraderie and the friendships that come with Bullitt ownership. We all love our cars, but it’s the people that make owning one of these cars really special.
more stories