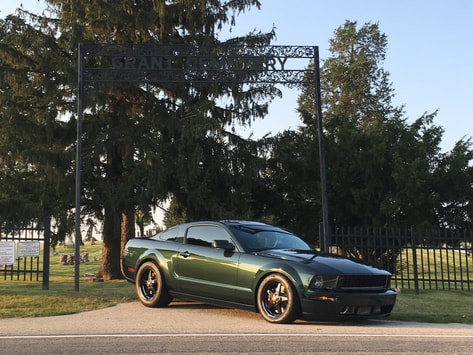 I took delivery of 1543 on Apr 6, 2009, with only 1,356 miles on it. I love the signature Bullitt Highland Green paint, the clean lines of a retro throwback, dark argent grey wheels, gt500 inspired interior, limited production, and that OEM exhaust tone. It had everything I wanted in an S197; super low mileage, no holes drilled in the bumper, clean and straight body, and factory HIDs.  From that starting point, I’ve modified the car to be twin-turbo powered and updated the drivetrain, wheels, brakes, and suspension. I also have done a few modest appearance changes.

​This car has a great deal of history with my girlfriend of 11 years and me.  We've shared a great deal of memories.  We've been involved in car shows, Mustang cruises, drag strip outings, date nights at drive-in movie theaters, general cruising, and so much more.  In 2012, I set her up with an opportunity to get behind the wheel of a retired NASCAR race car. She didn't know how to drive a manual shift, so I put her behind the wheel of my turbocharged Bullitt to help her learn.  In her driving group, she was the only female to participate, didn't stall, and actually went faster than all of the boys.  I attribute it to learning to handle the turbo Bullitt but also her skill and ability. Her father, sister, and I were so proud. I know Steve McQueen would have found it endearing as well.

This car was also featured in the Chicagoland Mustang Club's display at the Chicago Auto Show in 2015 alongside five other Mustangs. It took a great deal of effort to get there, with a lot of help from family and good friends.  It was one of my proudest moments of ownership with the car that I still reflect on to this day.

​This car is a keeper. It is garage kept and has helped shape an element of whom I am.  This car will never be for sale, and it will never be abused.  It's part of my family.  I've developed friendships because of it, and it's a part of my relationship with my girl. She loves it and has a Mustang of her own.
more stories